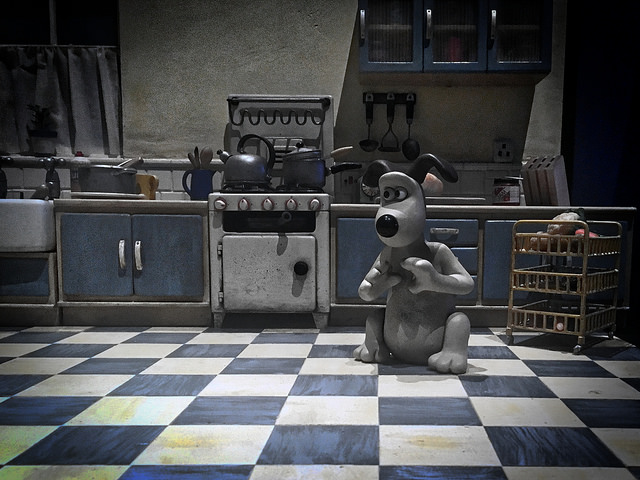 One can only hope in life to be as cool as Gromit.

Thanks to Seb Chang whom I am meeting officially a part of my visit Wednesday, I got a ticket for the exhibit. It was a double bonus as I also arranged meetup too with Aaron Davis @mrkrndvs who up until today I knew only through twitter and blogs. Thanks for spending part of your Sunday with me, Aaron. You are maybe number one.

There was plenty to keep busy studying, watching at the exhibit, not just the clips of Aardman animation, but sketches, props, and a great deal of info on the film making process done with clay. It’s always mind boggling to get a sense how much goes into a production that we never even see.

There was one display that had a quote about the importance of drawing to the character development process, this will come in handy with some talks coming up:

“I always start off by drawing. I start off with visual ideas. It’s what started off my film A Grand Day Out. I started drawing this rocket, and I thought it would be great just to build it.” — Nick Park

This stage of visual development is also an integral part of the writing process, already mixing narration and form. For example, the first storyboard for A Grand Day Out shows an annoyed Gromit with a big mount and a caustic smile, going so far as to bite Wallace when there is no more cheese lef tin the fridge. This is very different from the pragmatic, stoical character we know now, who tempers his master’s excesses and at the very most, shrugs his shoulders or frowns a little. Drawing is the starting point for all the stories and characters, “the top of a massive pyramid,” as Nick Park put it, in the creation of a film.

The exhibit also had a hands on studio, we each got two blocks of clay with some instructions to create a character “best with stout bodies and small legs”

Do not ask me to explain my sad creature. We then were led to different “sets”

Each was set up with an iPad and instructions to snap up the 30 frames after moving our models ever so slightly. The iPads were set up with the O Snap app, and we could email our creations so enjoy/cringe at them later.

I took my Quicktime movie into Photoshop, cropped and turned it into an animated GIF, it’s sort of a warning about playing kickball with space ships.

Lesson again- it’s far from easy to be good at this animation style. The thing I always love in Aardman style is the emotion and pull of the eyes of their character, always the eyes.

Later I found out there are quite a few Aardman loops on Giphy, and am especially proud to see Gromit is a true cog dog:

All in all it was a cracking good day!

See also the ACMI article on Wallace & Gromit: Aardman’s Odd Couple which looks at the relationship of this pair.

To think that initially Nick Parks envisioned Gromit as a cat! Good thing he dogged it up.

When describing the design journey towards the Gromit we know and love, Park commented that plans for Gromit continued to change when he began animating and found it easier to communicate a sense of character by moving his brow: “It gave him a personality, an inner, discerning mind. Suddenly he became a contrast; a child more intelligent than his father.” Gromit is really far too long-suffering for the intelligent child analogy to work very effectively; most children would rebel rather than pick up the pieces. Gromit may share his frustration with the audience through his expressive forehead – he has been described as a “silent snarker” – but he is nevertheless prepared to submit to the whims of his whacky owner, whatever they may be.

Check out as well the podcast ACMI produced about the exhibit

Barking about and playing around with web technology at http://cogdogblog.com On twitter @cogdog and flickr http://flickr.com/photos/cogdog View all posts by CogDog

This blog was first used to track the plans and process of my Flexible Learning Leaders visit to Australia in October 2007. The name is a parody of my site CogDogBlog (more…)

And it is being revived for another tour ten years later, via an invitation to visit Victoria from the International Specialised Skills Institute (more…)